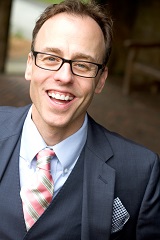 Smith Center for the Arts G68

Jimmy Calitri (Director/ Actor) holds an A.D. in Studio Art and Design, a B.A. in Theater Performance, a B.A. in Art History and Design, and an M.F.A. in Performance in Society from Rhode Island College. He is a former adjunct faculty member and director in the University of Rhode Island and Rhode Island College Theatre Departments. Jimmy now holds the position of Managing Director of Theater/ Assistant Professor of Theater of Acting and Directing at Providence College. His recent acting credits include appearances in Miss Pixie’s Local Cable Access Holiday Extravaganza at the Sandra Feinstein-Gamm Theatre, URI’s musical productions, Into the Woods, The 25th Annual Putnam County Spelling Bee & Company by Stephen Sondheim, and Mambo Italiano, an alumni production at Rhode Island College. At URI Jimmy directed Boy Gets Girl and also served as an Assistant Director for Singing in the Rain, Oklahoma, Little Women, and The Rocky Horror Show. In past seasons at Providence College Jimmy directed The Sweetest Swing in Baseball, Lend Me a Tenor (which was nominated for two Motif Magazine awards for Best Director and Best Production for 2012), Curtains: The Musical, What Dreams May Come, The Addams Family, and Into the Woods. Jimmy also directed A Lie of the Mind and Who’s Afraid of Virginia Woolf? at Perishable Theater the latter was named ‘Best of Theater in 2010’ by The Phoenix Newspaper and ‘Best Professional Production of 2010‘ by Motif Magazine. Favorite past directing jobs include A Midsummer Night’s Dream, Twelfth Night, Miss Julie, The Taming of the Shrew, and A-MIRROR-CA: A Critical Burlesque on America’s Media-Driven Culture, which was recently revived at RIC and received multiple awards at the KCACTF National acting competition in Washington DC including Best Conception of an Original Work, Best Playwriting, and Best Ensemble. It also earned a performance slot this spring at the Hyannis Region One Festival for the KCACTF national acting competition. In past summer seasons at ‘Festival 56’ (outside of Chicago in Princeton Illinois) Jimmy directed Songs for a New World, Alfred Hitchcock’s The 39 Steps, Joseph and the Amazing Technicolor dream-coat, White Christmas, The 25th Annual Putnam County Spelling Bee and Seussical the Musical. Jimmy directed The Miracle Worker at Rhode Island College which was revived in Plymouth MA in condensed form at an International Fundraiser honoring Helen Keller, and The Wiz at The Narragansett Pier Middle School which was recently awarded the ’Moss Hart’ award for ’Best Youth Production’ in New England. For the past four years Jimmy has served as a director and teacher of theatre arts at The Dreamland in Nantucket where he directed Beauty and the Beast, Seussical the Musical, Dreams of a New Year Cabaret, Shrek and The Wizard of Oz. Jimmy directed Assassins the Musical last year at the Contemporary Theatre which was nominated for best Musical of 2016 by Motif Magazine. Last summer Jimmy was hired by Ten31 Productions to direct a musical touring production of Alice in Wonderland, scheduled to travel to Dubai and throughout New England. Ten31’s production of Alice in Wonderland was revived in August of 2016 and again in January of 2017. Jimmy also wrote the adaptation of Alice in Wonderland for Ten31. Jimmy recently finished directing Into the Woods at Providence College. After directing Seussical for Festival 56, Jimmy will head to Nantucket Island to direct a production of The Tempest at The White Heron Theatre Company. In the Fall Jimmy will be directing The 25th annual Putnam County Spelling Bee at Providence College.